Global markets are reeling from the largest declines in the prices of “risky” assets since the global financial crash of 2008. With trillions of rand in value being wiped off various listed equity valuations daily, pension funds and individual retail investors would naturally be worried about just how much money they could lose.

The cause of the current market fallout is fear and uncertainty about the spread of Coronavirus (Covid- 19) and its effects on productivity and sales of companies globally as lockdowns take hold. An additional factor at play is the sudden, sharp drop in the price of oil as Russia, Saudi Arabia and other PEC members drop restrictions on oil production during a period of unprecedented low global demand – to enter what is effectively a price war in pursuit of market share – which will temporarily decimate profits from oil producers and related businesses.

“The impact of these two driving factors on markets has been unexpectedly severe, with the duration and consequences of both issues still unknown,” says Eggers. “Both globally and on the JSE, equities have been sold off sharply, on a synchronised basis.” 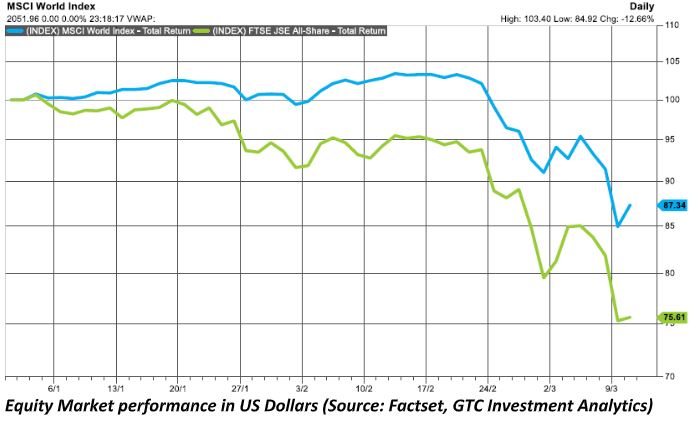 It is not just equity prices which have suffered either – other asset classes reflect an equally grim picture through 2020 to date: 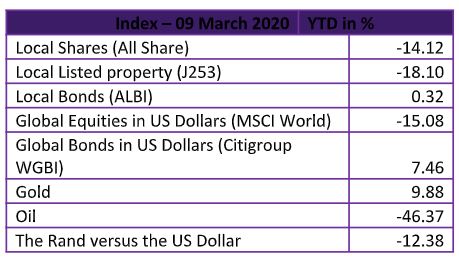 Despite China gradually gaining control over the spread of Coronavirus and beginning to return to full economic capacity, and the rest of the world implementing protocols for dealing with the virus, the investment community – which has all the benefits of instantaneous news access – is still selling out of some assets.

“Typically, in periods of uncertainty and fear, investors are tempted to move to less risky portfolios in an attempt to avoid losses. But as so many experts have cautioned before, trying to time the market is extremely difficult and almost always leads to value destruction,” continues Eggers.

“Investors should avoid making investment decisions based on short-term market movements, which is what we believe the current circumstances are,” he says.

The chart below illustrates the risk and impact of trying to time investments into or out of the share market. (Source: GTC Investment Analytics) 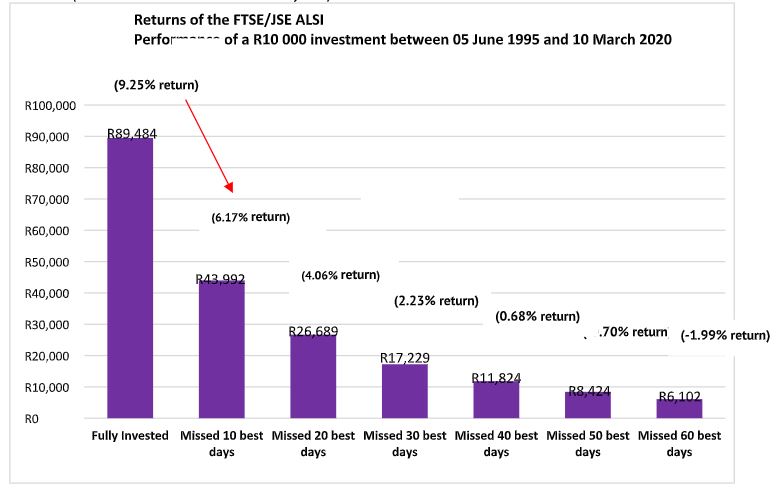 Based on the FTSE/JSE all-share index, the chart shows that if an investor misses just 10 of the best trading days over an approximate 25-year period (a total of 9039 days), that investor would effectively earn around half the return achievable over that time, had they remained fully invested.

Furthermore, research by JP Morgan in the United States has shown that on average six of the best 10 trading days occurred shortly after the 10 worst trading days.

“These facts explain why trying to time the market almost always results in failure. Given the advantages of remaining invested, as the evidence proves, investors should instead ensure they are invested according to their risk tolerance and investment objective, which should not be impacted by market developments. In most cases, no action should be required from investors,” Eggers concludes.

We use cookies on our website to give you the most relevant experience by remembering your preferences and repeat visits. By clicking “Accept All”, you consent to the use of ALL the cookies. However, you may visit "Cookie Settings" to provide a controlled consent.
Cookie SettingsAccept All
Manage consent

This website uses cookies to improve your experience while you navigate through the website. Out of these, the cookies that are categorized as necessary are stored on your browser as they are essential for the working of basic functionalities of the website. We also use third-party cookies that help us analyze and understand how you use this website. These cookies will be stored in your browser only with your consent. You also have the option to opt-out of these cookies. But opting out of some of these cookies may affect your browsing experience.
Necessary Always Enabled

Performance cookies are used to understand and analyze the key performance indexes of the website which helps in delivering a better user experience for the visitors.

Analytical cookies are used to understand how visitors interact with the website. These cookies help provide information on metrics the number of visitors, bounce rate, traffic source, etc.

Advertisement cookies are used to provide visitors with relevant ads and marketing campaigns. These cookies track visitors across websites and collect information to provide customized ads.

Other uncategorized cookies are those that are being analyzed and have not been classified into a category as yet.

SAVE & ACCEPT
Powered by